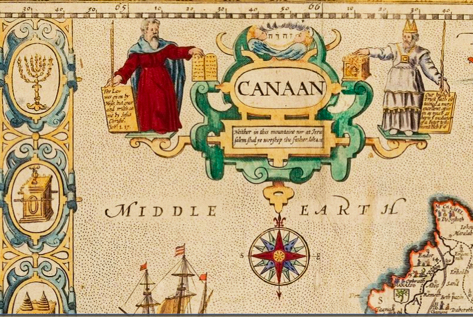 The Moldovan family Holy Land Map Collection was built over several decades by Dr. Alfred Moldovan and his family. It consists of 94 discrete maps dating from 1480-1797, printed in 23 distinct locations across Europe. The majority of the maps were printed in the 17th and 18th centuries in Amsterdam, Antwerp, Basel, Lyon, Paris, Rome, Strassburg, Tuebingen, and Venice. There are over fifty cartographers and engravers represented, including Adrichem, Bunting, Calmet, Hole, Mercator, Munster, Ortelius, Visscher, Wit, and Ziegler. It also features the unique surviving copy of Antonio De Angelis’s map of Jerusalem, printed in Rome in 1578. The map, the first view of Jerusalem based on direct observation and a key source for subsequent Holy Land cartography, was discovered by Dr. Moldovan and subsequently published in a study by him in 1983 in an article entitled The Lost De Angelis Map of Jerusalem, 1578’ in The Map Collector vol. 24 (1983), 17-25