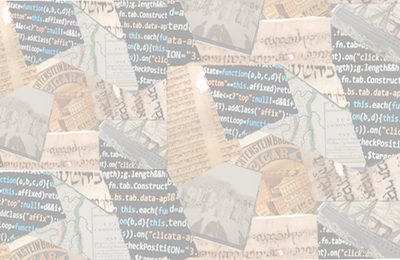 The Jesselson-Kaplan American Genizah Project is an international initiative to integrate digital technologies into the way we study early American Jewry. Its primary goal is to create an open access digital repository or “genizah” of physically dispersed primary sources that document the development of Jewish life in the western hemisphere from the 16th-19th centuries.

Historically, the term genizah commonly refers to an informal storage area where fragile Jewish documents, considered religiously significant, but ritually unfit, are put away until they are brought to a cemetery for a dignified burial. The trove of over 200,000 medieval manuscript fragments once held in the attic genizah of the Ben Ezra synagogue in Fustat, Old Cairo, dating from the 9th cent. CE is the most famous and important of the extant collections. Its contents - so-called Cairo genizah fragments, which came to light during the 19th century - subsequently were scattered around the world. Some appeared on and then disappeared from the antiquities market; the largest segment went to Cambridge University, where they became the object of intensive scholarly study.

In the late 1990s, thanks to a significant gift from a Penn alum named Jeffrey Keil, W’ 65; PAR ’91 Penn initiated a project, in collaboration with Cambridge University Libraries, to apply digital technologies to discover new intellectual matches among these physically dispersed fragments). Through this initiative we were able to demonstrate how digital technologies may serve as discovery tools to identify matches among a global diaspora of thousands of fragments of medieval manuscripts (see: http://sceti.library.upenn.edu/genizah/index.cfm ) .

The methodological framework for the Jesselson-Kaplan American Genizah Project grew out of this successful initiative. It became clear how digital technologies also could be utilized to enhance access to dispersed archival documents and indeed produce dynamic forms of discovery through full-text searchability of transcribed hand-written documents, periodicals and other printed works. The Jesselson-Kaplan American Genizah Project is based on the successful proof-of-concept the Penn Libraries pioneered, in partnership with Cambridge University and later with the participation of the Library of the Jewish Theological Seminary of America.

#Project History Beginning in January of 2006, a small group of scholars, library professionals, and private collectors convened to form a National Advisory Committee for the digitization of rare Judaica Americana. The impetus for this project originated in discussions in the Fall of 2005 between Arnold Kaplan and Arthur Kiron about how to provide open access to the Kaplans’ exceptionally important yet inaccessible private collection. Their conversations gained a sense of urgency and eventually took on an organized form after they and other committee members subsequently recognized the need to redress the ongoing dispersal through auction (occasionally via E-Bay and systematically through Raynor’s Historical Collectibles Auction House) of significant (both in terms of quality and quantity) Judaica Americana manuscript material. Dr. Gary Zola, the Executive Director of the Jacob Rader Marcus American Jewish Archives convened the Advisory Committee’s initial conference calls and called for the formalization of the Advisory Committee, which was subsequently adopted. He also wrote two letters of support on behalf of grant proposals, and created the Isaac Mayer Wise Digital Archive at the JRM-AJA: http://americanjewisharchives.org/wise/home.php

#Acknowledgements The Jesselson-Kaplan American Genizah Project is named for two of our National Advisory committee members who have provided tremendous support, both in terms of their time and treasure, for the project: Michael Jesselson and Arnold Kaplan. One of the most important lessons we hope our project illustrates is how new technologies make it possible for private collectors and public institutions to partner in creative ways for the public good without compromising the mission and goals of either community.

The University of Pennsylvania Libraries are leaders in the creation of freely accessible, archival quality digital collections of primary source materials to support teaching and research at Penn, and around the world. Since 1996 Penn Libraries’ Schoenberg Center for Electronic Text and Image (SCETI).has generated interdisciplinary digital collections of primary source materials ranging from medieval times to the modern era. SCETI also develops technology tools to access and use digital collections, which include text, image, and sound files, in support of research and teaching in the humanities.