As the project manager and developer for Judaica Digital Humanities at the Penn Libraries, I’m excited to announce the launch of the Digital Second Edition of Judaica Americana. This is an Omeka database which draws from Robert Singerman’s Judaica Americana, a bibliography chronicling American Jewish book production until 1900. The Digital Second Edition contains 3,000 supplemental entries to the print edition. The project’s features allow users to search the bibliography by author, language, holding institution, and various tags, as well as find open-access links to digitized Jewish monographs, serials, and periodicals.

You can view the project at singermanja2.exhibits.library.upenn.edu/. Additional information about the project can be found on the Judaica DH website at judaicadh.github.io/work/judaica-americana.

In July 2019, Robert Singerman, emeritus university librarian at the University of Florida, donated to the Penn Libraries the draft of the full text and the copyright to his revised second edition of Judaica Americana. The first edition, issued in 1990, is an award-winning, magisterial two-volume bibliography of American Jewish publications before 1900. The print edition of Judaica Americana was sponsored by the Center for the Study of the American Jewish Experience, Hebrew Union College-Jewish Institute of Religion, and published by Greenwood Press as part of the Bibliographies and Indexes in American History.

In it, Singerman identified just over 6,500+ monographic and serial publications, presented with meticulous bibliographical descriptions, classification explanations, and holdings information, i.e., the names of collections where copies are known to be held. His bibliography chronicled American Jewish book production from the 17th century to the beginning of the twentieth century. Taken as a whole, Singerman’s bibliography provides extensive and authoritative documentation of American Jewish communal activity and growth before 1901.

When starting the project, I read book reviews of Judaica Americana to understand what exactly we were attempting to transform. In addition to building on the work of existing American Jewish bibliographies like Rosenbach’s, several reviews mentioned Singerman’s use of multiple bibliographic techniques, by which they meant OCLC, RLIN, and traditional onsite visits to institutions. For me, that was a key detail, recognizing Singerman’s bibliography as a distinct moment in time between past bibliographies (which required someone to physically view and document each monograph) and the use of online databases in scholarly communication.

Bibliographer Nathan Kaganoff’s review of the first edition was not the most positive review, but provided crucial insight into how our project could augment and transform Singerman’s work. Kaganoff asked four questions in his review:

1) Does this bibliography present new data or information that was not previously available?

2) How does it appear physically compared to the earlier bibliographies? Does the use of a computer bring with it any unusual elements or features?

3) Have we learned anything new about the quantity of American Jewish printed material? How has this material been preserved and what might we still anticipate finding in the future?

4) Does “Singerman” now become the definitive bibliographic tool for students of early American Jewish history rather than “Rosenbach”?

For Kaganoff, the print edition fulfilled Questions 1 and 3, but fell short in Questions 2 and 4. I found this review really helpful in framing the value of our project for scholars and the steps we needed to take at each stage of the process. Kaganoff’s questions are similar to those digital scholarship practitioners use to evaluate digital projects, and these were key areas in which our project could expand upon the print edition. 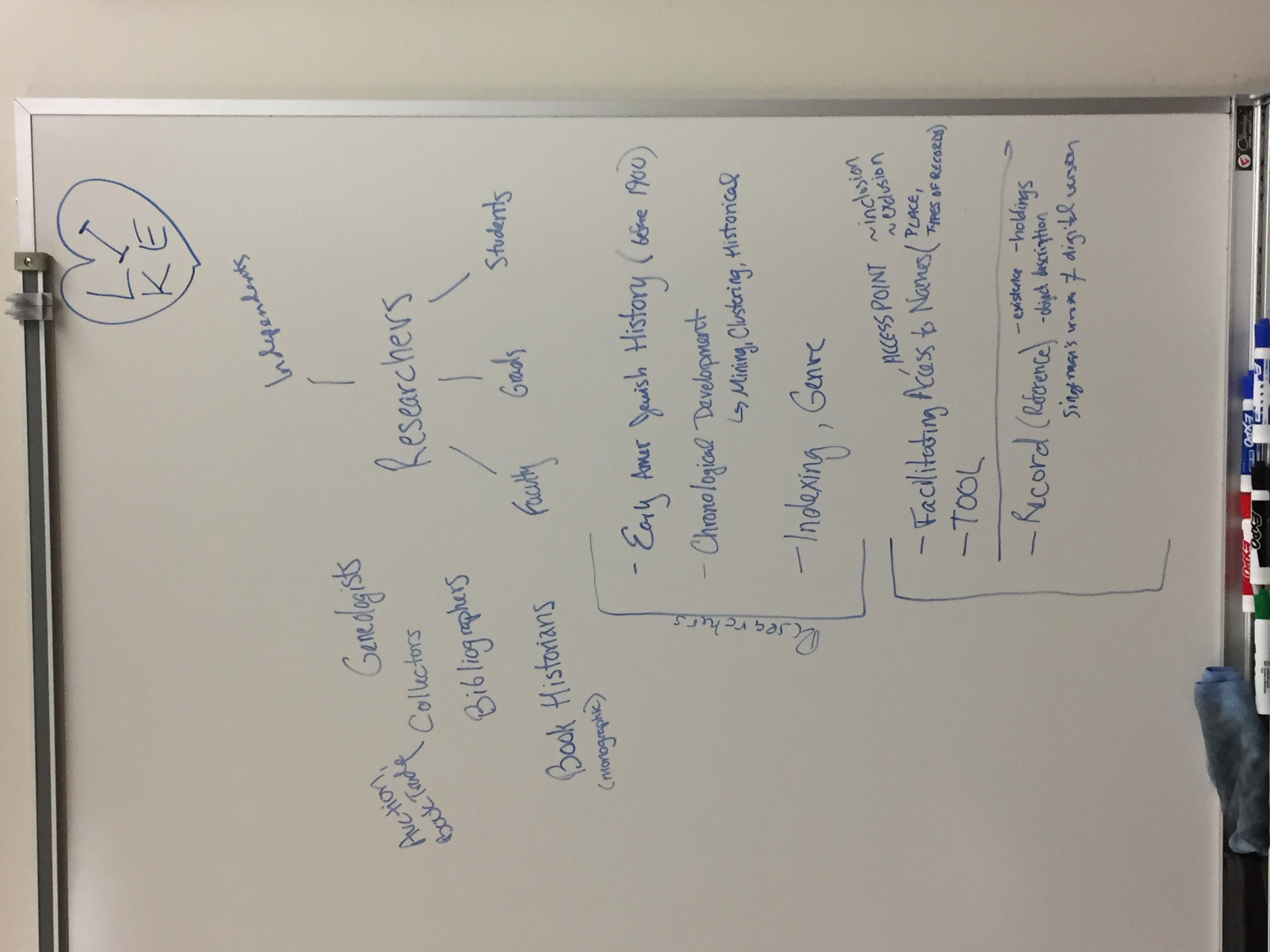 One of our boards following the User Analysis model from Yale DH.

This was the first project I undertook from start-to-finish at Penn, and I used this as an opportunity to learn best techniques for engaging my colleagues, understanding library infrastructure, and segmenting the project into clear goals. To guide us in our project planning process, we used elements of the YaleDH Lab Project Planning Toolkit. Most helpful for us were the Lean Canvas and User Analysis worksheets, which identified key user audiences and experiences we wanted to facilitate with both the dataset and the database.

We also used this time to talk about existing projects related to ours. In particular, we took inspiration from Women in Book History and the Footprints: Jewish Books Through Space and Time, both of which are databases for book history. We really admired how both projects had clean, clear interfaces, and contextualized their projects for user engagement.

As part of the Jekyll and Python Working Groups at Penn, I also spent a lot of time with the team working on the Digital Beehive here at Penn. The Digital Beehive project is a working digital edition of Francis Daniel Pastorius’ Beehive Manuscript, a commonplace book begun in 1696. While the Digital Beehive’s data is a lot more complicated than the datasets we used, the project’s interest in understanding how can digital formats faithfully replicate pre-digital data systems provided a good example of how a similar project could be built in Jekyll.

We also spent a lot of time referring to the physical book at this point, so I always had the library copy on my desk. It was often a conduit for asking questions in the planning stage about how we wanted to represent things digitally. Some of the questions:

Over the course of a few meetings and rounds of editing, we completed a project charter that borrowed sections from Yale DH Lab, PM4DH at Emory, and Princeton DH Charters to address all the questions we had in mind. 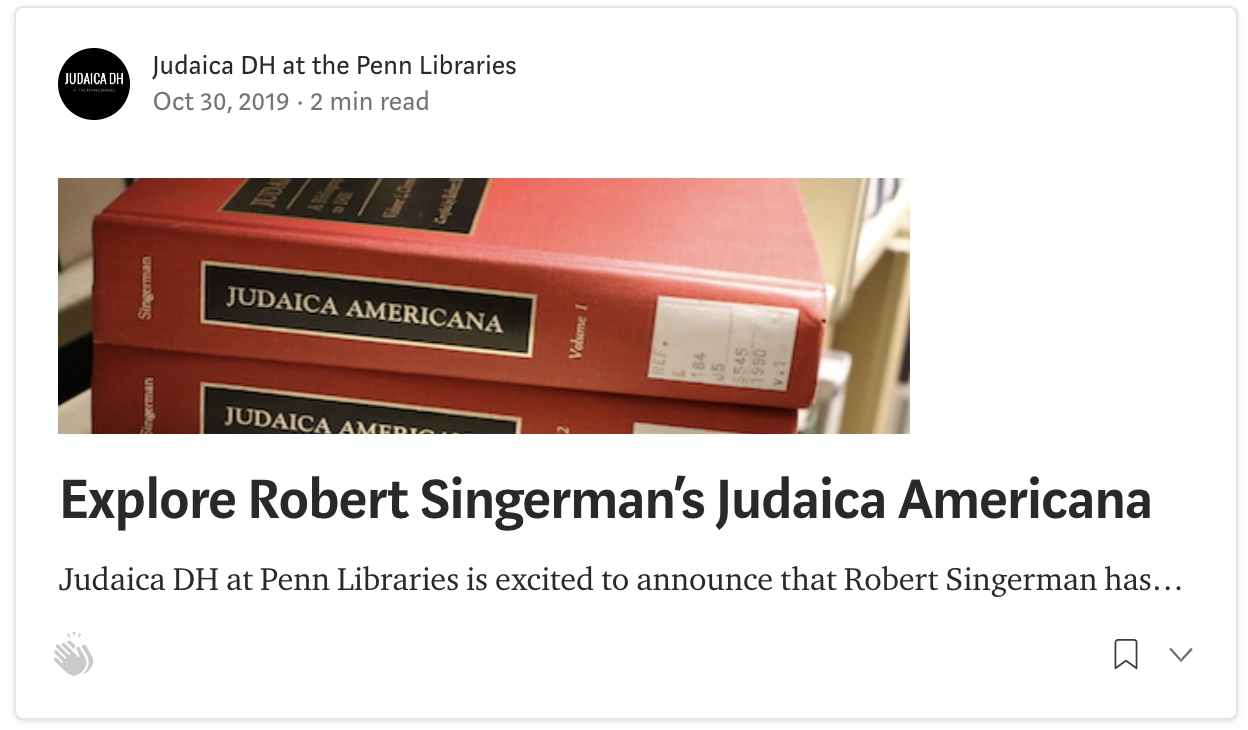 A screenshot of our Medium announcement about the ScholarlyCommons repository.

The dataset for the open-access edition, as well as the process of converting the chronological file into a dataset, is discussed a forthcoming article for Journal of Open Humanities Data. I borrowed from my experience working on the 1853 New York Crystal Palace to write a script that separated out id numbers, year, entry, notes, and holdings information based on the structure of the original text. This was further cleaned through a combination of OpenRefine and manual review.

There were probably more effective ways to write this script that would not have been as labor-intensive for data cleaning, but this balance worked for me. It also helped us answer a lot of questions along the way, such as how we wanted to clean fields like “Location”, “Publisher”, “Author/Editor”.

After merging the revised second edition draft with additional supplemental entries, and converting the chronological file into a dataset, both were deposited into a project-specific ScholarlyCommons repository. At this time, we announced the open-access edition to the public and the start of our project.

We agreed with Singerman at this point that any edits or additions to the dataset would not be uploaded to ScholarlyCommons until the end of the project. For any new entries to the supplement that Singerman would send us, we created a Google form that structured data entry for the dataset. (Over the course of the project, Singerman sent eleven updates to the database, with five to fifteen new entries each time.) Establishing that boundary early on in our process helped us be consistent. 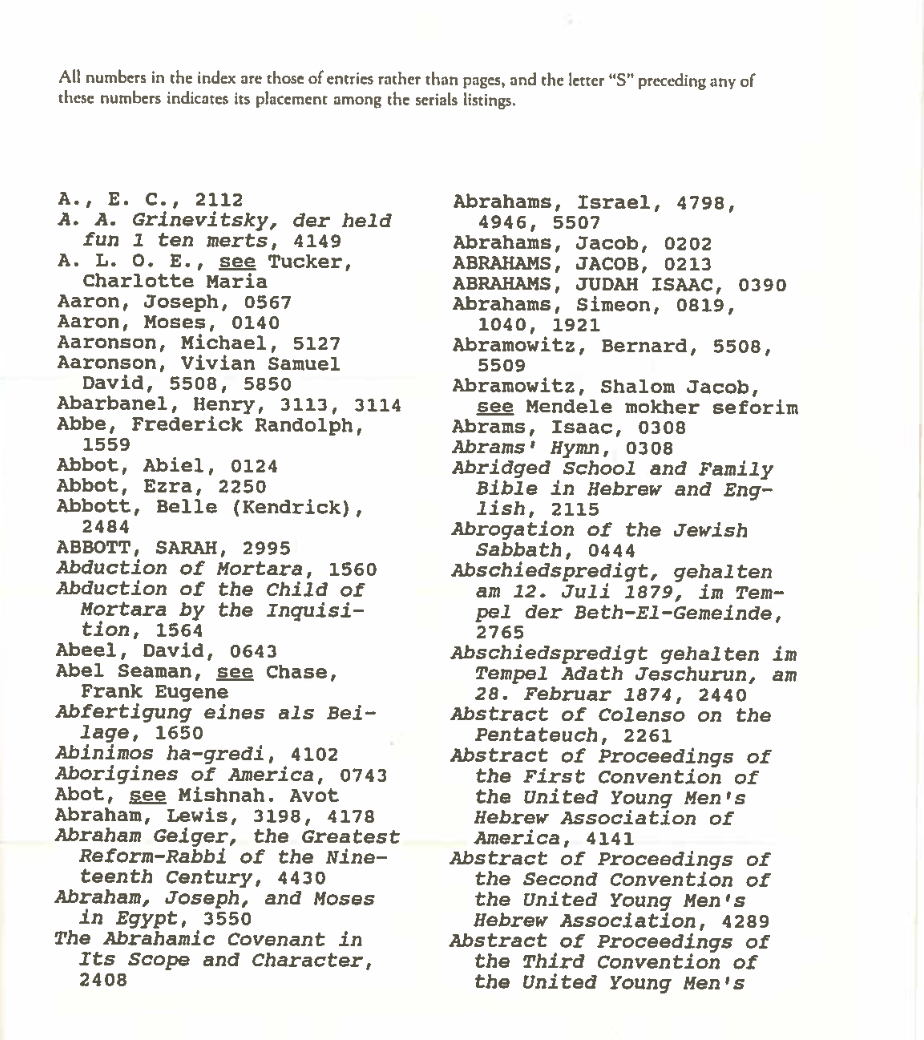 A scan of the Singerman index, which includes nearly 12,000 headers.

At this point, we were ready to augment the dataset in a few ways:

While we initially proposed building the project on a static site in order to have full control over the site’s display, it was around this stage that we switched to Omeka instead. Working with Omeka allowed us to have an established project interface to scale up for future phases of the project. It also brought together a variety of library departments for consultation and support in a way that we may not have been able to do on another platform. It engaged a lot more staff in the conversation of our project, yielding new insights into its development.

We worked with the library’s Learning and Technology Services division to get installations of Omeka on the library server. By the end of February, we shared the first draft of the site with our project team, which featured the first 500 entries in chronological order. We had built the incremental loading of data into the project charter, initially with 5%, 10%, 50%, etc. In practice, those percentages didn’t make sense, so we scaled this incremental practice to specific numbers and focused our questions around that data for our team to go in and review.

By the end of March, we shared the second draft of the site with the team, including the first 1,000 entries in chronological order. Some of the changes we made for this draft:

The graphic header for the site - the books in the background comes from a #shelfie at the *Library at the Katz Center for Advanced Judaic Studies*.)

By the end of April, we shared the third draft of the site with the team, including all the entries in chronological order. Some of the changes we made for this draft:

We launched the final version of the site in May. Most of the changes here were small edits to the dataset we had noticed in user review. We also made changes for database’s “Browse” pages to reflect as closely as possible the original draft in chronological order by publication. We used Omeka’s collection feature to separate out the Chronological File (sorted in chronological order) and the Union List (sorted by title).

Since October 2019, the PDF of Judaica Americana on ScholarlyCommons has 1,125 downloads and the dataset 96 downloads. These files have been downloaded from 80 institutions and 96 countries. As of May 2020, there are 8,881 monograph entries in the database, including 2,936 supplemental entries added from the first edition. 58% of the original entries have WorldCat links, 18% have HathiTrust links, 10% have GoogleBooks links, and 6% have Internet Archive links.

During summer 2020, we plan to identify open-access links for the ~3,000 entries in the supplement, and improve existing links that may have broken in the past few years. We also hope to enter vernacular titles for more entries, especially those in the supplement.

There are three outstanding tasks that we hope to complete in future phases of the project:

We set out to create an interactive digital edition of this rich bibliography and we can’t wait to see what discoveries can be made based on this data. We would love to see this project modeled in the creation of other enumerative bibliographies or digital library collections.

And while Singerman’s bibliography focuses on monograph holdings at various locations, we now have the opportunity to take this a step further and quantify the efforts of library digitization through projects like HathiTrust and Google Books. We hope this encourages others to identify digital facsimiles of their collections, whether on an institutional or cross-institutional level.

Our full team is listed here.

First and foremost, this project would not be possible without the generosity of Robert Singerman, who entrusted us with his extraordinary work. It is with his conceptualization, vision, and data curation that this project is possible.

I was responsible for the data preparation and project methodology. As the developer and designer, I designed the look and feel of the site, editing the Omeka theme that is used for the navigation and user interaction with the site. Senior developers Kate Lynch and Chris Clement, and DevOps Developer Andrew Kimball provided Omeka support on this project.

Many thanks to the distinguished scholars, librarians, and staff who generously provided guidance and assistance with the project, including: Michelle Chesner, Laurie Allen, Camille Davis, Laura Newman Eckstein, Doug Emery, Scott Enderle, Emily Morton Owens, Will Noel, and Jordan Rothschild.

You can view the project at singermanja2.exhibits.library.upenn.edu/. Additional information about the project can be found at judaicadh.github.io/work/judaica-americana.